Infrastructure in the spotlight at Journalists Forum 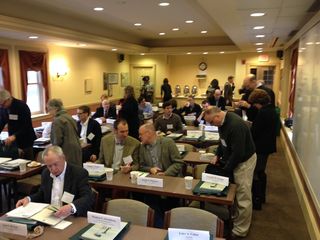 A diverse group of experts and practitioners  led a discussion on urban infrastructure with writers and editors at the annual Journalists Forum on Land and the Built Environment, put on by the Lincoln Institute of Land Policy, Harvard University's Graduate School of Design, and the Nieman Foundation for Journalism at Harvard University.
The two-day forum March 28-29 began with a presentation on transforming streets and public spaces by  Janette Sadik-Khan, former transportation commissioner of New York City and now at Bloomberg Associates.  Noting that installing bike lanes, a bike-share program, and car-free spaces in Times Square prompted opposition from drivers and businesses and those who viewed the initiative as "vaguely French," blogger Josh Stephens pondered whether there was any "wisdom in the hysteria."
Rich Cavallaro, president of Skanska USA Civil Inc., acknowledged the D+ grade and $1.6 trillion funding shortfall for infrastructure in the US. Instead of high-priced megaprojects, however, he suggested more targeted ways of making infrastructure more resilient, in anticipation of more climate-related disasters: equipping  tunnels with floodgates and giant inflatable plugs, raising up grates and power substations, and designing parking garages and similar facilities so they can be flooded and cleaned up when waters recede.
The inter-connected impacts of global urbanization requires a broader framework for urban infrastructure, outside of the "box" of individual metropolitan areas, said Neil Brenner, professor of urban theory at the GSD. "We need to update our cognitive map of urbanization," he said. Pierre Bélanger, associate professor of landscape architecture at the GSD, predicted that working with nature -- and even allowing certain abandoned areas return to a wild state -- would eclipse the traditional approach of controlling water and putting streams in pipes. Reinventing and designing new infrastructure in the urban environment is possible but requires political leadership, added landscape architect Margie Ruddick.
Addressing the critical question of equity -- who the infrastructure is for -- Stephanie Pollack, associate director of the Dukakis Center for Urban and Regional Policy at Northeastern University, called for better metrics and engagement to satisfy the true needs of those who use public transportation. "We measure equity ... in education and health care, but not in transportation. We have no concept of how a transportation system would be 'fair.' " Higher-income residents in transit-oriented development, for example, don't tend to use the transit, displacing residents who do and forcing them to move further away.
One instance where cities are willing to invest billions in infrastructure is in putting on mega-events like the World Cup and the Olympics, despite evidence of little payoff in terms of permanent jobs, revenues, or branding, said Judith Grant Long, associate professor of urban planning at the GSD. According to Esquire, one new road in Sochi could have been paved with caviar and it would have been cheaper. The International Olympic Committee could help cities better plan and deliver more compact, "right-sized" games;  Barcelona, Rome, Tokyo, Munich, Montreal, and London have all worked hard to transform Olympic villages for long-term use.
Lincoln Institute president Gregory K. Ingram led an evening conversation with David Gergen, senior analyst at CNN and co-director of the Center for Public Leadership at the Harvard Kennedy School, at the Nieman Foundation's Lippmann House, exploring shifts in power and politics from states and the federal government to cities. Mayors may not routinely become president, but they are practical problem-solvers at center stage, Gergen said. "Cities are where the experimentation is taking place."
On the second day of the forum, Robert B. Olshansky, professor of Urban and Regional Planning at the University of Illinois Urbana-Champaign, and Laurie A. Johnson, principal at Laurie Johnson Consulting|Research, surveyed how several nations are better coordinating disaster relief and recovery efforts. Building long-term resilience as part of that process was the subject of the recent report Lessons from Sandy. Ryan Ellis, postdoctoral research fellow at the Belfer Center for Science and International Affairs at the Harvard Kennedy School, addressed the complex challenge of security and infrastructure, revealing the cloak-and-dagger world of cyber attacks, vulnerabilities, and zero days.
Public-private partnerships, private roadway building and operation, and tolling systems have marked innovations recently in the financing of infrastructure, said Jose A. Gomez-Ibanez, professor at the GSD and the Harvard Kennedy School. Arguably since the completion of the interstate highway system, the federal role has been unclear; the challenge is showing the public who benefits from projects, in justifying who pays. The Supreme Court decision in the Koontz case may influence how private developers pay for environmental mitigation or affordable housing in the future, said GSD professor Jerold S. Kayden.
Susannah C. Drake, principal at dlandstudio pllc, detailed creative approaches such as retooling the waterfront apron of lower Manhattan and capping sunken highway trenches through urban neighborhoods. Advances in technology make infrastructure less expensive, compared to the massive investments of the New Deal, but the nation cannot just seek to rebuild what has been built. Marcus M. Quigley, principal at Geosyntec Consultants, showed how smart technology and dynamic, intelligent controls can transform major facilities. "We can change the way our infrastructure acts on our behalf," he said. "Every time we repave a street or a sidewalk, we’re burning an opportunity."
As per tradition, the forum included two sessions devoted to "Practicing the Craft." Brian McGrory, editor of The Boston Globe, detailed efforts to integrate "searingly relevant" journalism in a digital business model that is sustainable. The Globe has more readers than ever, he said. Inga Saffron, architecture critic for the Philadelphia Inquirer, who won the Pulitzer Prize shortly after the forum, joined Chicago Tribune architecture critic Blair Kamin, Jerold Kayden, and Greg Ingram and Armando Carbonell from the Lincoln Institute, in a conversation on the interaction between journalists and expert sources.
Several participants among the 40 journalists and Nieman fellows filed dispatches, including Roger K. Lewis at The Washington Post, Tim Bryant at the St. Louis Post-Dispatch, and Christopher Swope at Citiscope.