Cities Increasing Reliance on Fees as Other Revenues Fall

Cities continuing to struggle with finances have been increasingly relying on user charges and fees, according to an analysis of freshly updated data from the Lincoln Institute of Land Policy’s database on local government finance, Fiscally Standardized Cities.
User charges and fees - for sewer systems, waste management, parks, city-run hospitals and airports, and for a range of services including education, housing, and community development - are the only major source of revenue that has grown since the start of the Great Recession in 2007. On average, after adjusting for inflation, per capita revenues from user charges grew by over 7 percent between 2007 and 2012. During the same period, property tax revenues fell by 5 percent, and revenues from state aid and from other taxes by nearly 10 percent. 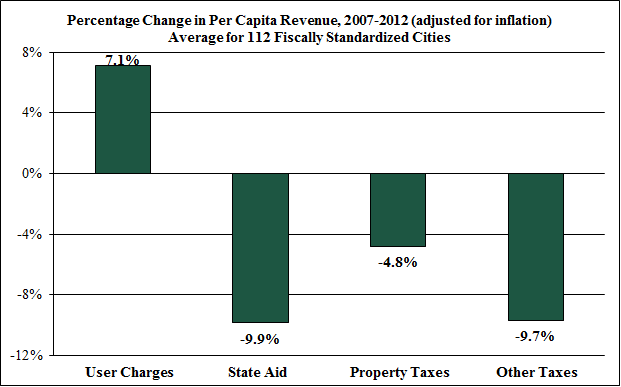 The growth in user charge revenues continues a long trend. Data from the Fiscally Standardized Cities database show that after adjusting inflation and population change, user charge revenue in the average city in the database increased by 143 percent from 1977 to 2012. Revenues from local taxes other than the property tax, such as a local sales tax, increased 88 percent, while revenue from more traditional sources increased at a lower rate in that period. State aid grew by 53 percent, and property tax revenues by 17 percent, while federal aid actually declined by 18 percent. 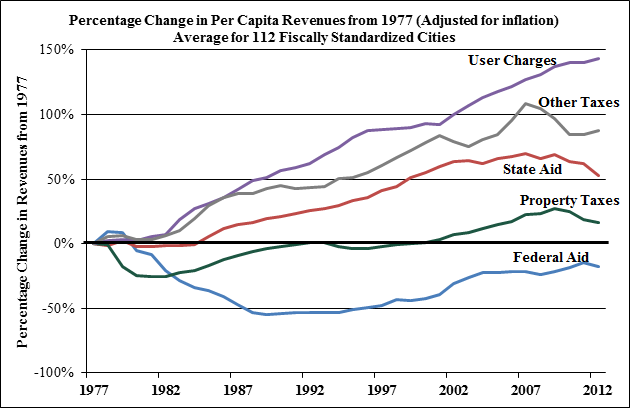 The increased reliance on user charges has helped cities offset drops in other revenue sources, but has not led to increased spending. In fact, real per capita spending reductions from 2009 to 2012 occurred across almost all categories of spending, including public safety and education. Further, cities have scaled back dramatically on basic investments: the largest percentage cuts occurred in capital outlays (18.4 percent). These reductions in capital spending occurred at a time when many central cities are facing large unmet infrastructure needs due in large part to aging water, sewer, and transportation systems, and during a time when the interest rate costs of financing capital investments are at historical lows.
“Cities are making unwarranted choices to make fiscal ends meet in the short term while compromising long term security and stability,” said George W. “Mac” McCarthy, president and CEO of the Lincoln Institute of Land Policy, who called for a revisiting of the fundamental covenant of property taxes - the focus of opposition and tax limits - to fund services and restore “municipal fiscal health.”
“The costs of these choices are invisible until they erupt in dramatic ways - when bridges fall into the Mississippi, or buildings explode in Harlem as a result of hundred-year-old gas lines, or are debilitated by social protests. We are facing real structural challenges regarding the way we supply the basic public goods that most people take for granted.”
Writing in the current issue of the Lincoln Institute’s quarterly magazine Land Lines, McCarthy noted how many municipalities are increasing reliance on revenue from traffic citations and the sale of tax liens to investors, as they struggle with decades-old planning decisions that have decanted jobs and population to the suburbs, and costly federal mandates in the upgrading of infrastructure.
The Fiscally Standardized Cities database uses data from the Census Bureau to provide a full picture of all revenues raised from central city residents and businesses and spending on their behalf, whether done by the city government or an independent overlying government. The estimates add together revenues and expenditures for city governments and an appropriate share from overlying county governments, school districts, and special districts, allowing a meaningful comparison of local public finance across 112 cities. The database includes data up to 2012, the most recent year for which Census Bureau fiscal data are available. Users can build their own tables to analyze the data in the database, to compare property tax revenues in two cities, rank all cities by their school spending, investigate changes in public sector salaries over time, or see which cities are most reliant on state aid to fund their budgets.
In 2012 both revenues and spending in most of the nation’s largest central cities remain below their pre-recession levels, said Lincoln Institute fellow Andrew Reschovsky, who teamed with senior research analyst Adam Langley at the Lincoln Institute and Howard Chernick of Hunter College to create the database. “Incomplete evidence from 2013 and 2014 data suggest that in 2015 many central cities remain in weak fiscal health, with inadequate revenues to provide important public services to their residents.”
The single largest category of user charges are for sewers, and these grew substantially during and after the Great Recession. Sewer charges averaged $221 per capita for the 112 FiSCs in 2012 - up 16 percent from 2007 in real per capita terms. That is nearly $900 for a family of four. In some cities, sewer charges are much higher than average, including Detroit ($728), Seattle ($662), Atlanta ($503), and Tacoma ($501). Higher sewer charges are driven by many factors, including rising costs associated with meeting wastewater treatment requirements under the Clean Water Act. 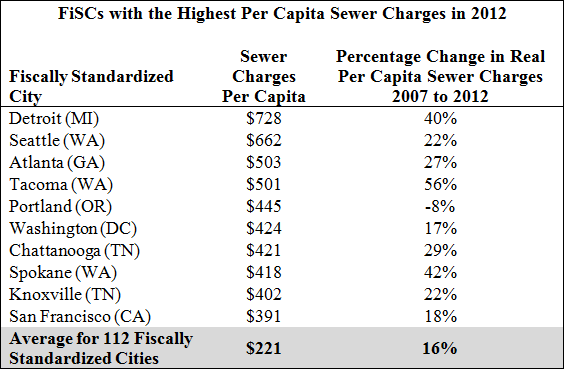