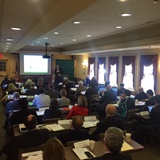 New England legislators focused on the long run fiscal challenges of funding infrastructure and crafting tax systems that will be fair, efficient, and stable at the annual Economic Perspectives on State and Local Taxes seminar at the Lincoln Institute earlier this month. State legislators from each of the six New England states reviewed trends in capital spending and infrastructure needs, property taxes, and state business taxes at the event, organized in partnership with the New England Public Policy Center of the Federal Reserve Bank of Boston.
The presentations can be viewed on our SlideShare page by clicking on the name of each speaker.
Ron Fisher, professor of economics at Michigan State University and visiting scholar, New England Public Policy Center at the Federal Reserve Bank of Boston, found that capital spending in New England is significantly below the national average by all measures, possibly due to efforts to limit government debt. Brian Pallasch, managing director for government relations and infrastructure initiatives of the American Society of Civil Engineers, pointed to a $1.6 trillion gap nationally in infrastructure spending over the next five years. Edi Tebaldi, associate professor of economics at Bryant University, suggested that public-private partnerships could help. Fellow Lourdes Germán presented on the current realities of how municipalities fund infrastructure via bond financing.
Addressing current issues in property taxation, Mark Haveman, executive director of the Minnesota Center for Fiscal Excellence, reviewed effective property tax rates for homeowner, apartment, commercial, and industrial properties in the 50-State Property Tax Comparison Study.
John Anderson, professor of economics at the University of Nebraska and a visiting fellow at the Lincoln Institute, concluded that the property tax remains the most stable revenue source over time, compared with the sales and income tax. Bo Zhao, senior economist at the New England Public Policy Center of the Federal Reserve Bank of Boston, shared research on non-school fiscal disparities in Connecticut.
In a broad-ranging discussion of reforms in state taxation of business, David Merriman, professor of public administration at the University of Illinois-Chicago, argued that states need to think strategically about how they tax businesses, keeping in mind the tradeoff between revenue generated and jobs created. Jared Walczak, a policy analyst with the Tax Foundation, looked at how state tax costs of doing business vary by state and by business type. Greg LeRoy, executive director of Good Jobs First, presented a study of economic development programs in the U.S., finding that large businesses reap the vast majority of tax incentive dollars, thereby shortchanging small business. Finally, LeAnn Luna, a professor at the University of Tennessee, concluded the seminar with a strong critique of the state corporate income tax, and an explanation of some alternatives including a gross receipts tax or value added tax.
The annual seminar aims to improve dialogue and inform policymakers in the Lincoln Institute’s continuing campaign to promote fiscal health.

Amid unprecedented challenges facing the world’s cities, the Lincoln Institute of Land Policy has published an e-book that explores the centrality of land to the global urban future, and offers insights for cities grappling with changing planning, financing, and housing needs.
The e-book, Land and the City, is a compilation of the proceedings from the Lincoln Institute’s 2014 Land Policy Conference, edited by Lincoln Institute President George W. McCarthy, former President Gregory K. Ingram, and Program Manager Samuel A. Moody.
Drawing from a broad array of expertise and research, the book demonstrates how land policy shapes issues as diverse as the sustainability of local government revenues, the impacts of the foreclosure crisis, and urban resilience to climate change. The book contains four sections:
Urban Planning: The book addresses the contexts in which long-term urban planning will occur, from the transition from the baby boomer to millennial generation to the potentially cataclysmic impacts of climate change. It highlights the Atlas of Urban Expansion as a tool that can help planners navigate the challenge of putting land to the best and highest use while establishing a grid that allows for good mobility and infrastructure.
Taxation: This section describes the state of the property tax, the largest source of revenue raised directly by U.S. cities. It outlines the effects of limits imposed by tax revolts, and the impacts of the Great Recession on the property tax and municipal revenues more broadly.
Housing Finance: This section describes the impacts of the foreclosure crisis on households and neighborhoods, explores the uncertain future of Fannie Mae and Freddie Mac – government-sponsored enterprises for home mortgage finance – and explains the challenges facing China’s housing system after the introduction of private housing markets in 1998.
Housing Policy: The final section describes policy approaches to deal with housing shortages and affordability challenges in Latin America, reviews the nature and impact of private communities on residential segregation, and compares the level of socioeconomic segregation in the educational systems of Latin America and the United States.
Chapters in this e-book include: Demographic Change and Future Urban Development, by Dowell Myers and Hyojung Lee, with commentary by Ann Forsyth; Monitoring the Share of Land in Streets: Public Works and the Quality of Global Urban Expansion, by Shlomo Angel with commentary by Michael B. Teitz; Climate Change and U.S. Cities: Vulnerability, Impacts, and Adaptation, by William Solecki with commentary by Matthias Ruth; The Past and Future of the Urban Property Tax, by Grant Driessen and Steven M. Sheffrin, with commentary by John Yinger; Local Government Finances During and After the Great Recession, by Adam H. Langley, with commentary by Michael A. Pagano; Foreclosures and Neighborhoods: The Shape and Impacts of the U.S. Mortgage Crisis, by Dan Immergluck, with commentary by James R. Follain; A Realistic Assessment of Housing Finance Reform, by Laurie S. Goodman, with commentary by William Apgar; An Evaluation of China’s Land Policy and Urban Housing Markets, by Joyce Y. Man, with commentary by David Geltner and Xin Zhang; Housing Policies and Urban Development: Lessons from the Latin American Experience, 1960–2010, by Eduardo Rojas, with commentary by Stephen Malpezzi; The Relationship Between the Rise of Private Communities and Increasing Socioeconomic Stratification, by Evan McKenzie with commentary by Gerald Korngold; and Socioeconomic Segregation Between Schools in the United States and Latin America, 1970 –2012, by Anna K. Chmielewski and Corey Savage, with commentary by Tara Watson.