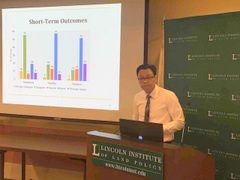 Northeastern University political science professor Benedict S. Jimenez shared the results of an ambitious customized survey of cities on their strategies for dealing with fiscal stress, at Lincoln House just before the holidays. Results show an emphasis on cutting expenditures over revenue-raising approaches – and that most cities say they are on the brink of crisis.
Research on fiscal retrenchment at the local government level has been severely hampered by limited data on city finances after the Great Recession of 2007-09, he said. Comprehensive Annual Financial Reports (CAFRs) require a Freedom of Information Act request, and one third of states do not require local governments to file them. Census of Governments and the Annual Survey of State and Local Government Finances provide limited information. The Lincoln Institute database Fiscally Standardized Cities allows the comparison of budgets for 112 municipalities.
Jimenez thus started his own survey, targeting appointed managers and budget or finance directors in cities with a population of 50,000 or more, and got 268 of the 674 queried cities to respond. The results provide a new window into the state of local public finance, and showed that most cities were relying on piecemeal strategies to stay away from insolvency year after year. The conditions are harsh: 42% reported that spending is growing faster than revenues; 36% reported increasing spending for current benefits; 35% cited dependence on fewer resources; 34% noted the further constraint of tax limits; and 29% were dealing with increased spending on post-employment benefits.
In the area of personnel, almost two-thirds of respondents said they were leaving vacant positions unfilled, freezing hiring or salaries, and cutting professional development. Fewer were engaged in layoffs, moving employees part-time, revising union contracts, or reducing salaries for current employees. In services, almost one-third reported deferring capital projects and maintenance projects, rather than eliminating services outright, closing facilities, or cutting key services such as public safety. In striving for efficiency, many cities were asking more state aid or changes in aid formulas, or shifting the responsibility of functions and services to another level of government. More than half reported making better use of technology.
On the revenue side, cities are relying on increased user fees – something the Lincoln Institute researchers have also found. Much less common was trying to increase the property tax rate and expand the property tax base, or increase the sales tax.
While economic cycles, and the Great Recession in particular, have great impact, cities report long-term structural issues that make fiscal stress the “new normal” for most. Overall, 7 out of 10 cities reported that they are on the precipice of another budget crisis – and don’t expect that feeling to change in the next five years.
This lecture was the first in the 2015-2016 series as part of the campaign of the Lincoln Institute to promote municipal fiscal health. The video can be viewed in its entirety here.