Towards a Reliable System of Monitoring Urban Expansion 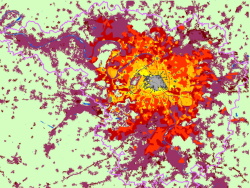 Preliminary findings of a multi-year initiative to monitor urban expansion worldwide, shared at a global cities summit at the Venice Biennale, reveal that unplanned human settlement is consuming land at an alarming rate.
The expanding footprint of sprawling cities, primarily informal shantytowns at the outer fringe, is characterized by a lack of arterial grids, unwieldy block sizes, and inadequate open space.
The analysis was part of a preview of the revised and expanded Atlas of Urban Expansion, a partnership of UN-Habitat, the New York University Urban Expansion Program, and the Lincoln Institute of Land Policy. The research project will provide extensive information about the world’s fast-growing cities through satellite imagery, complemented by survey analysis of the quantity and quality of urban growth, housing affordability, and the impact of regulations.
The aim is to establish a scientific understanding of how the world’s cities are growing, and to measure performance and identify trends in the implementation of the New Urban Agenda following the Habitat III global cities summit in Quito, Ecuador this October.
In a presentation titled “The Case for Planning” at the Urban Age Shaping Cities conference at the Biennale, UN-Habitat executive director Joan Clos said that a preliminary analysis of a representative sample of 200 cities showed a pervasive lack of urban planning in fast-growing metropolitan areas struggling to accommodate millions of mostly poor rural migrants.
The unplanned and unfettered growth is bad for the environment, increases the cost of delivering basic services, and hinders economic activity and food security, he said.
Shlomo “Solly” Angel, a professor and senior research scholar at NYU, said that cities are growing upwards and outwards, and the amount of outward expansion, or “urban extent,” is typically underestimated. For example, in 2000, the built-up area of Zhengzhou, China was 286 square kilometers. According to its master plan approved in 2009, its built-up area was expected to reach 400 square kilometers by 2020. But in fact, the city reached 612 square kilometers by 2015.
The Atlas of Urban Expansion will be an open-source online resource with maps, images, and data on spatial changes that have taken place in cities of the world during the last 25 years with the aim of helping cities make realistic plans in preparing for their future expansion.
The centerpiece will be the global sample of 200 cities, showing growth from 1990 and 2015, a period when the area occupied by cities in more developed countries increased by a factor of 1.8, and in less developed countries increased by a factor of 3.5. If that rate continues, the total amount of land taken over by urban land use would be equivalent to the entire country of India.
The sample represents the universe of all 4,231 cities and metropolitan areas that had 100,000 people or more in 2010.

In the weeks leading to Habitat III in Quito, UN-Habitat, New York University, and the Lincoln Institute plan to release additional analysis, including an examination of the pervasive shortage of safe, decent, and affordable housing, and the impact of regulatory regimes in shaping the observed patterns of urban growth. The goal is to have the new Atlas of Urban Expansion become an evolving, open-source tool to monitor global urbanization for many years to come.